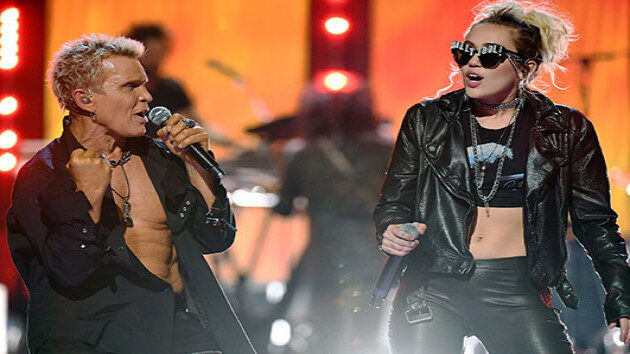 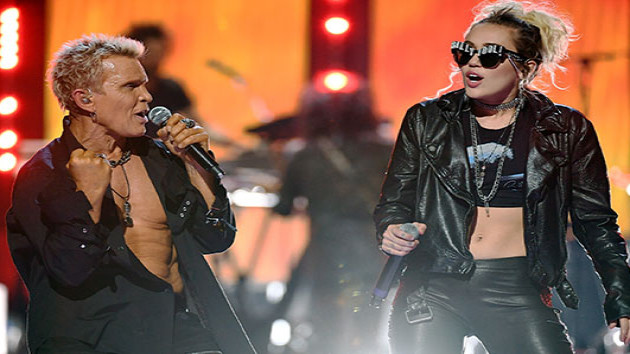 Billy Idol and Miley Cyrus in 2016; Ethan Miller/WireImageMiley Cyrus headlined Super Bowl LV's "TikTok Tailgate" on Sunday and welcomed a pair of rock 'n' roll legends to kick her performance up a notch.

Tapping Billy Idol and Joan Jett for the pre-show, Cyrus brought fans anxiously awaiting the big game at Raymond James Stadium to their feet. Idol and Jett, of course, are featured on "Night Crawling" and "Bad Karma," separate tracks that appear on Cyrus' rock-influenced new album, Plastic Hearts, and the two rockers respectively hit the stage to perform those tunes with Miley.

Idol joined Cyrus early in the show for a rendition of "Night Crawling." Then with Billy grinning from ear to ear, he and Cyrus turned his 1982 smash "White Wedding" into a powerhouse duet.

Later in the concert, Jett appeared for a mini set with Cyrus, which featured "Bad Karma" and two classics from the Rock & Roll Hall of Famer's extensive catalog -- "Bad Reputation" and "I Hate Myself for Loving You."

Cyrus' set also featured plenty of her own hits, as well as a cover of Toni Basil's "Mickey" -- appropriately altering the spelling to "Miley" -- as well as versions of Blondie's "Heart of Glass," Nine Inch Nails' "Head Like a Hole," Bikini Kill's "Rebel Girl" and Dolly Parton's "Jolene."