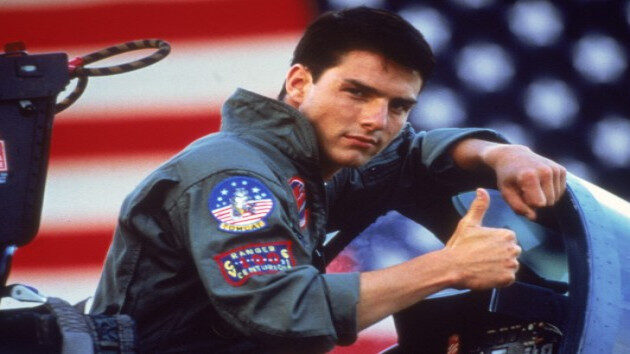 It was 35 years ago Sunday that Tom Cruise first strapped into an F-14 Tomcat as Pete "Maverick" Mitchell in Top Gun.

To celebrate the movie's birthday -- and today's "Top Gun Day" -- Paramount is re-releasing the 1986 blockbuster on the big screen.

Producer Jerry Bruckheimer tells ABC Audio, "We're very excited for [November's] Top Gun: Maverick, but we're also excited for the audience to see the restored Top Gun...And we want to get people back to the theaters. What's more...enticing than to see Top Gun?"

For the producer behind massive hits like the Bad Boys, National Treasure and Pirates of The Caribbean franchises, Top Gun is still special. "[T]hat's starting with Tom Cruise," Bruckheimer says.

"...His performance, the fact that Tony Scott [was] directing...We caught lightning in a bottle. And...it's hard to replicate that," Bruckheimer says, before teasing, "But I think we did it with the new one."

The prolific producer adds, "It's such a fun movie and it brings back such great memories for me being down in Miramar, California, while we made it. And just watching Tom become the superstar that he deserves to be. "

Anthony Edwards, who played Maverick's partner Nick "Goose" Bradshaw, also praised the late director Scott, adding he's "not surprised" at the movie's longevity. He says with a laugh, "No one was trying to make Doctor Zhivago. They were trying to make a great dessert. And I think they did. And it's fun for me because people love Goose, and it was fun to play that role."

Rick recalls, "Of course, Tom is a complete competitive freak, so...he was working out the whole time and then Val really wanted to catch up [but] I didn't give him too much help," he smiles.

"You know, I was a bodybuilder as a kid growing up, as a teenager. And when I was in college I was a huge, Arnold was a huge -- Pumping Iron -- he was a huge idol of mine. I got to do Terminator and I got to do a couple of other projects with him. And, you know, it was just part of my life. So I knew that [scene] was going to be a payday for me. So I was ready!"

He adds he's happy fans still ask him about the movie, "...because it was such a great time."