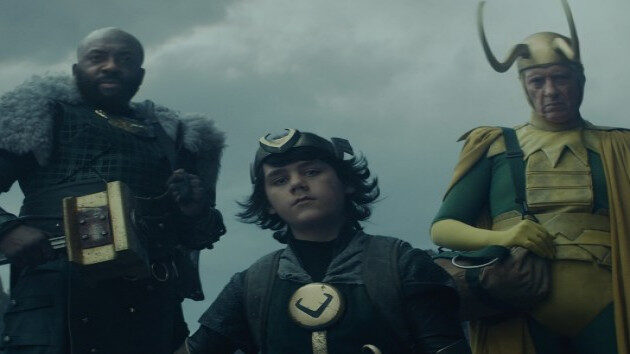 (SPOILERS AHEAD)We're down to the last two episodes of the Disney+ series Loki, and director Kate Herron recently teased what we can expect in the final installments; episode five of Loki drops on Wednesday.

Herron explained to Hollywood Life the purpose of Loki's first post-credit scene, in which Tom Hiddleston's titular character finds himself in a strange place where he confronts three other Lokis after being pruned by Gugu Mbatha-Raw's Ravonna.

"I just felt like it would just give it a bit more punch, basically," she explains. "It was meant to have that kind of surprise intention, obviously, but I just felt prolonging it and giving that gap really gave it the punch that we were after."

As for the post credits scene, where Loki asks "Is this Hell?" -- referring to one of the nine realms -- Herron says the significance "is just that he doesn’t know where he is, and he’s wondering if it could be that."

Regarding Ravonna's reason for pruning Loki, Herron promises, "We’re going to find out so much of what she knows and where her head is at as the story continues."

"I love how Gugu played it when Mobius -- played by Owen Wilson -- is deleted. She’s doing it for the greater good, but she has that moment after where she takes a breath," she continues.  "It wasn’t an easy decision.  So I think, for me, more of Ravonna and how she feels about everything is to be answered, but there are definitely questions that we will answer in regards to that."

Herron also says the series will explore Loki's reaction to seeing different variations of himself, as well as if he and Sylvie -- played by Sophia Di Martino -- will be reunited by the end of the series.

Marvel is owned by Disney, parent company of ABC News.