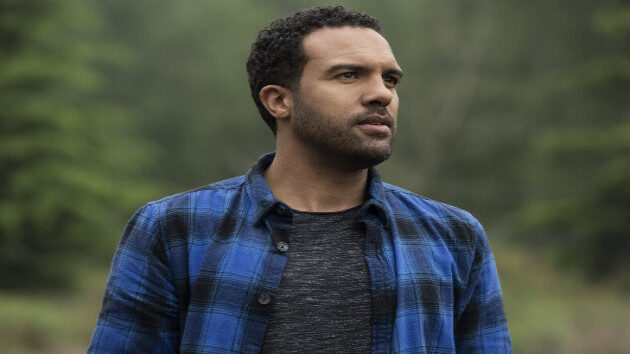 Black Widow star O-T Fagbenle admits he took a bit of a crash course in the Marvel Cinematic Universe to channel his character of Rick Mason, an ally from Natasha Romanoff's/Black Widow's S.H.I.E.L.D. past.

"I didn't know anything about the dude," Fagbenle reveals to ABC Audio, before sharing he also had a hand in cultivating his character.

"My Bible for [Rick Mason] was Eric [Pearson]'s script and figuring it out between me, Cate [Shortland], our director, and Scarlett [Johansson] -- what our backstory was," he says.  "That's really what brought Rick Mason to the screen."

Fagbenle, who calls Mason "Black Widow's Q [from 007 lore], or like what Batman is to Alfred," says his character's connection to Romanoff is bigger than the "covert operations specialist" figure from the comics.

"[He's] the person who like hooks up with all the gadgets and stuff -- you need a ship, you need a plane, whatever," Fagbenle says. "But what was interesting to me... is that he's got a relationship with Natasha Romanoff which isn't just platonic -- isn't just a work relationship."

"There's a deeper dynamic going on there," he continues. "And I think that's one of the things that's interesting about the movie, is you get to see the 3D view of Black Widow."

While bringing Rick Mason to life could be described as somewhat challenging, Fagbenle says keeping mum on his MCU character for three years, was actually pretty easy.

"It wasn't that hard for me," Fagbenle laughs. "Like on Tuesday, I'm spending time with my mom. And then in the evening, I'm talking to my niece and nephew and I'm doing work... I'm doing other stuff. So when people ask me, I'm like, 'Oh, I can't talk about that.' And then I'm getting on with the rest of my day."