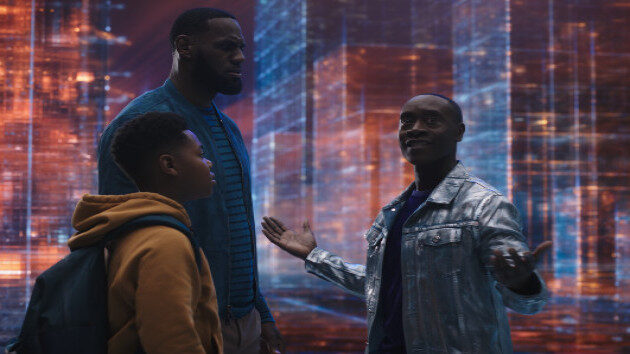 It wasn't much of a challenge for Iron Man star Don Cheadle to go from superhero to a Looney Tunes supervillain in his new film Space Jam: A New Legacy.

Cheadle, who plays Al-G Rhythm, a tyrannical computer A.I. who hopes to "delete" his competition, says his "evil" Space Jam character isn't as bad as everyone makes him out to be.

It was also "a lot of fun" for Sonequa Martin-Green to take on her role of Kamiyah, a character loosely based on LeBron James' wife, Savannah. Martin-Green says she "appreciated the way her character was written" because she's the "matriarch" and "nucleus" of the family.

"You get to see the strength and ferocity met with the grace and the patience," says Sonequa. "And you see this woman navigating perfectly in and out of these relationships, knowing exactly how to say what, and when to say it... And I think it pays homage to Savannah."

While both actors can agree that the compelling characters are what make the film authentic and entertaining, Cheadle notes that it's the messages in the film that provide the important takeaway.

"It's about individualism and letting people be who they're going to be," he says. "Not trying to dictate who people have to be so that you feel comfortable."

Cheadle continues, "Even as a dad, being a father, that's one of the biggest challenges... So... it's about people being who they want to be and letting people experience their lives for themselves and supporting that as a parent at all costs."