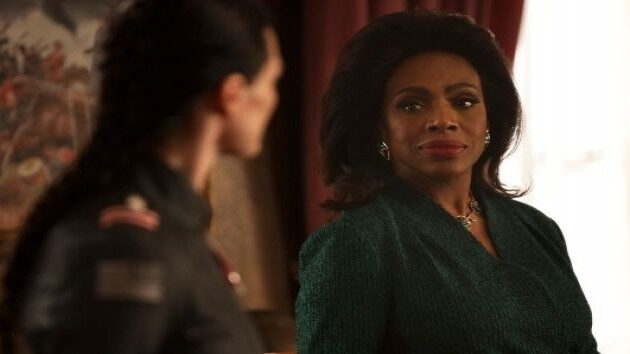 Season two of Freeform's Motherland: Fort Salem is coming to a close, but not before things get a little crazy. Sheryl Lee Ralph, who reprises her role as President Kelly Wade in the show's final two episodes, tells ABC Audio that she just couldn't help but return to the series.

"How do you say 'no' to something like that?" she asks rhetorically. "And, I’m a woman of color! I love it."

Thanking screenwriter Eliot Laurence for "choosing her for this role," Ralph adds that the timing of receiving it was interesting because at the time she was "working hard" for now-Vice President Kamala Harris.

Ralph explains that her role as the POTUS in Motherland: Fort Salem continues to intertwine with her real life, even today, as she's currently running to become the SAG-AFTRA LA Local Vice President.

"So, it's like 'wow,' President Kelly Wade has an incredible impact on my life," she expresses.

As for what’s next for her character in the show, Ralph reminds fans that General Alder used a puppet spell on President Kelly Wade, before teasing "you never know what happens in a mind meld" and "you never know how things will end up."

"Sometimes the most powerful person never lets you know what their power is, never -- until it bites you in the behind and you have to find out for yourself," she says. "I have a funny feeling it's going to get deep and it’s gonna get crazy!” (ABC AUDIO 1-ON-1)

Watch Motherland: Fort Salem Tuesdays on Freeform at 10pm and the next day on Hulu.