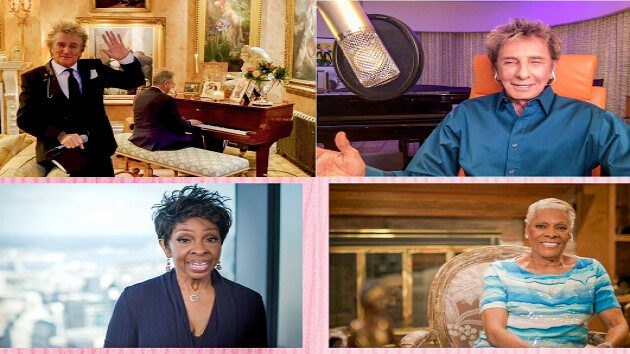 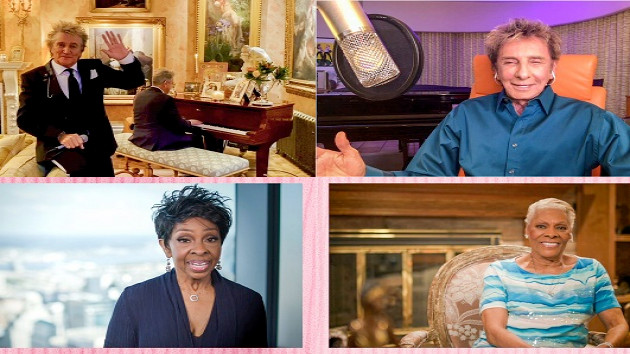 The event started with Adam Lambert and Oscar-nominated singer and actress Cynthia Erivo teaming up to deliver a virtual performance of the 1987 number-one hit "I Knew You Were Waiting (For Me)," originally recorded by Aretha Franklin and George Michael. Erivo portrays Aretha in the upcoming season of Nat Geo's series Genius.

The gala closed with an all-star version of the 1986 number-one hit "That's What Friends Are For," featuring the original artists Warwick and Knight, plus U.K. pop star Sam Smith and Erivo singing the parts originally performed by Elton John and Stevie Wonder. Kenny G also jumped in to play Wonder's distinctive harmonica part on his saxophone.

Stewart, meanwhile, sang a version of his hit cover of Van Morrison's "Have I Told You Lately," accompanied by a pianist, while Manilow performed "One Voice" with a virtual choir, and Tony Bennett sang "The Way You Look Tonight."

During the event, archival clips of other stars performing at past fundraisers were shown, including Whitney Houston, Ricky Martin and Beyonce. You can watch the entire event now on YouTube -- it's the first year it's been made available to the public.

The Carousel of Hope Ball was founded in 1978 as a fundraiser for the Barbara Davis Center for Diabetes in Aurora, Colorado, and the Children's Diabetes Foundation. Davis, a philanthropist, established the Foundation in 1977 because her daughter suffers from the disorder. Saturday's installment of the event, which also served as a celebration of Davis' 90th birthday, raised more than $1 million.

Many celebrities also made appearances to wish Davis a Happy Birthday.