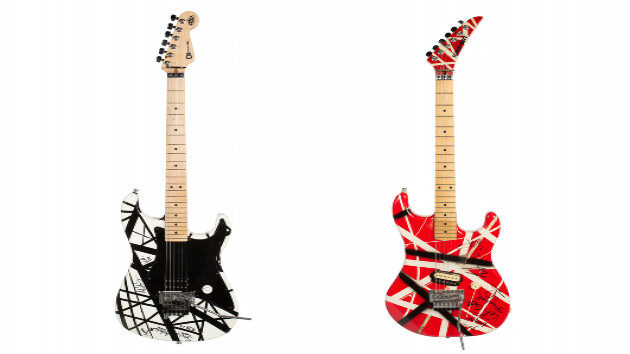 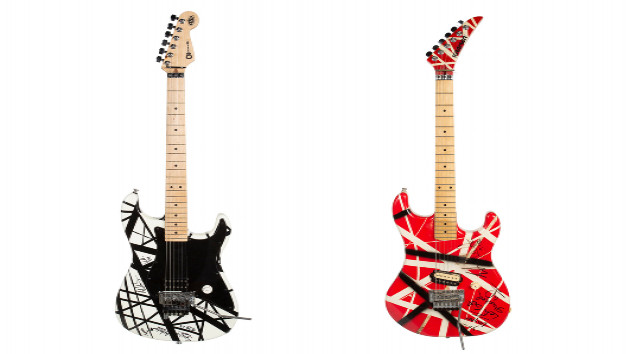 Courtesy of Julien's AuctionsTwo famous guitars that belonged to the late Eddie Van Halen will be auctioned during a rock memorabilia sale scheduled for December 4-5 at the Julien's Auctions location in Beverly Hills, California.

The first guitar is a 2004 EVH Charvel Art Series electric model boasting a similar white-and-black abstract design that Eddie's famed 1978 Van Halen I guitar had. It features taped stripes applied by Eddie himself, as well as his signature. Van Halen also initialed the guitar "VH 04" and wrote the inscription "San Antonio Texas/9-28-04" on it.

The second guitar is a customized electric model that Van Halen built with his guitar tech Matt Bruck at the rock legend's 5150 home recording studio. It feature a red body with white and black stripes designed and applied by Eddie, and a tremolo bar. In 1991, Van Halen gave the instrument to his good friend Bryan Cash, owner of Cash's Centenary Oyster House in Shreveport, Louisiana, as a gift, and the guitar was put on display at the restaurant's bar, and Eddie would play it when he visited.

The guitar was signed by Van Halen with the inscription: "Yo - Bryan…Let's get shucked up…Eddie Van Halen…5150."

Among the many other items going up for bid at the auction are a Fender Stratocaster guitar played and smashed by Nirvana's Kurt Cobain, a crystal-adorned white glove that belonged to Michael Jackson, a black macramé Zodiac-signs belt worn by Elvis Presley, and a Viewers' Choice Award that Aerosmith won at the 1993 MTV Video Music Awards.