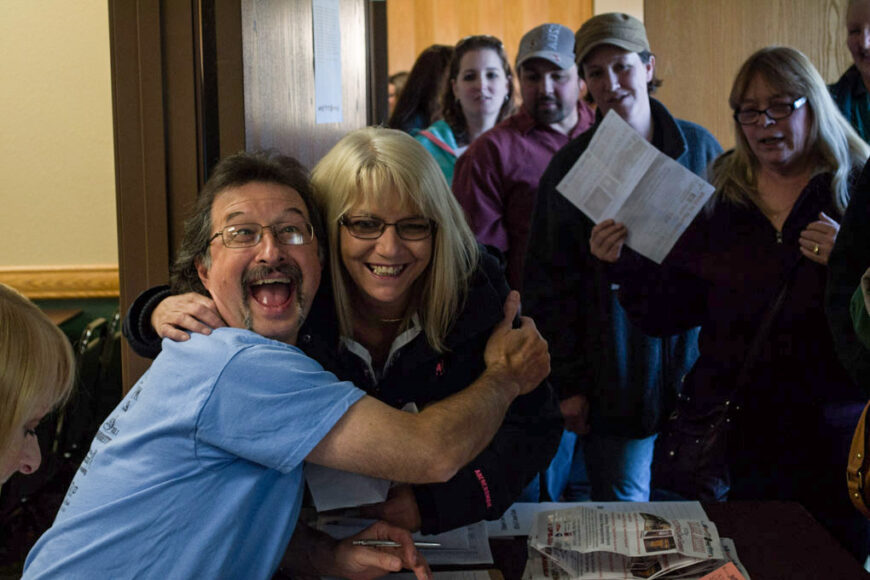 By 6:30p, hundreds of people formed a line that ran out of the Red Rock Lanes and into the parking lot! Dennis and Dee Dee registered our guests and kept the line moving. Then, Dee Dee released the tables for dinner. Starving, I piled my plate high with Mama Russo’s mouthwatering mostaccioli, cudighi bites and homemade salads. Now that’s Italian food done right!

After scraping my plate clear, the great staff at the Red Rock Lanes whisked away my plate as Walt Lindala took the stage. Without a delay, he started drawing names and handing out t-shirts, visors, wine glasses and more from the mountain of door prizes next to him.

Then, BioLife gave away a $50 Visa Gift Card to Mike Kutchie, ServPro gave a carpet care kit to Kim Midthun, and Synergy Fitness gave away two massages to Crystal Hackett and John Basolo.

Next, it was time to pick out our finalists. How? By playing Bingo! The winner of each round stepped up to the front of the room and picked out an envelope. Was it the grand prize?

A drumroll started in the banquet area as the 8 finalists ripped open their envelopes. Then, Mike Kutchie excitedly held his envelope in the air! He won the grand prize!

Even though they didn’t win the grand prize, the rest of the finalists received great gift baskets and certificates too! Stefany Jecevicus from Gwinn won a 3-month membership to Synergy Fitness. Kim Midthun from Negaunee won a $100 gift certificate Wattsson & Wattsson Jewelers. Troy Frayer from Marquette won a LaFayette Collision Center medium vehicle wash, wax & interior shampoo certificate from UP Bargains. Kay Beaudry from Negaunee won an Auto Armor interior shampoo and exterior polish for a minivan or 4-door utility vehicle from U.P. Bargains. Brenton Fitzpatrick from Marquette won a “Guy’s Basket” from Super One Foods. Brian Jarvi from Ishpeming won a “Women’s Basket” from Super One Foods. Charles Eberhard won a Keystone Light hunter’s backpack and chair and other swag from Great Lakes Wine and Spirits.

Our next grand prize giveaway is Two Tickets to Paradise! Be sure to register to win!

See 200 photos from the giveaway here!