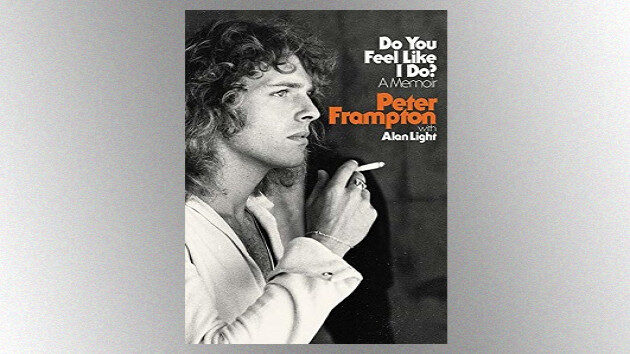 Hachette BooksThe story of Peter Frampton comes alive in his new memoir, Do You Feel Like I Do?, which was published on Tuesday.

The book, which the guitar whiz co-wrote with music journalist Alan Light, delves deeply into Peter's roller-coaster career, including his rise to pop idol status with the massively successful 1976 album Frampton Comes Alive!

Peter recounts in the book how the album's meteoric popularity made him a reluctant superstar, and put immense pressure on him to duplicate its success.

Frampton tells ABC Audio that as the album shot to #1 on the charts in 1976, he had a fantastic time headlining large arenas that he previously had played as an opening act.

Peter admits, "I was enjoying myself immensely up until I got the phone call from my manager [saying,] 'You have now just surpassed in sales...Carole King's Tapestry record, which is the biggest-selling record of all time.' And that's when I got very nervous."

Frampton's 1977 follow-up album, I'm in You, did well commercially, but was an overall disappointment, and marked the beginning of the end of Peter's successful pop career.

Interspersed throughout the book are segments focused on how Frampton was reunited with his favorite guitar, a 1954 black Gibson Les Paul calls the "Phenix," over 30 years after he instrument was thought to have been destroyed in a 1980 cargo plane crash.

As for why the story is featured so prominently in the book, Peter notes, "It's sort of my life. The guitar rose to great heights with me on my shoulder, and then around the time my career started to crash, so did my guitar. And then, the rediscovery of the guitar is like the reinvention of my career, in a way."

For more information about the memoir, visit PeterFramptonBook.com.