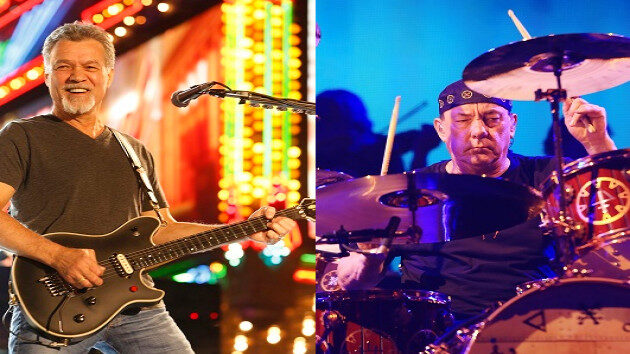 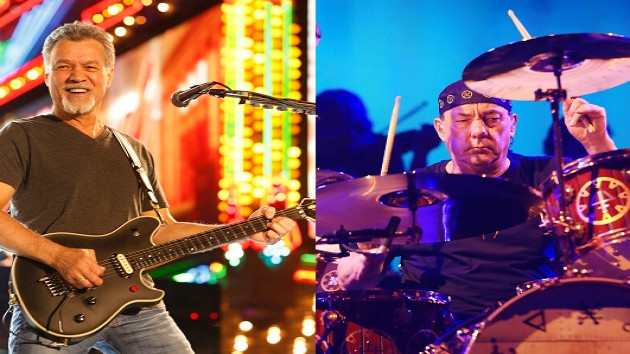 Eddie Van Halen: Randy Holmes/Walt Disney Television via Getty Images; Neil Peart: Jason Squires/WireImageThe music world said goodbye to many major artists in 2020, among them two rock musicians who emerged in the 1970s that many rank among the greatest and most influential to play their chosen instruments, as well as a rock 'n' roll pioneer who was considered one of the most dynamic performers of all time.

2020 began on a somber note when Rush drummer Neal Peart died on January 7 at age 67 after a three-and-a-half-year battle with brain cancer. Peart's illness had been kept secret until his band mates -- singer/bassist Geddy Lee and guitarist Alex Lifeson -- announced his passing on January 10.

Peart, who joined the Canadian prog-rock group after the release of their 1974 self-titled debut, had long been lauded as one of rock's most influential drummers. He also became the band's primary lyricist. Neil's powerful and technically proficient playing and his literate lyrics influenced by fantasy, sci-fi, mythology and philosophy, helped Rush become a hugely popular band.

The group was inducted into the Rock & Roll Hall of Fame in 2013, and the band called it quits after completing a 40th anniversary tour in 2015. Shortly after the trek ended, Peart announced his retirement from music.

Eddie Van Halen, one of the greatest guitar heroes of his era, died at age 65 on October 6 from complications of cancer, although his immediate cause of death was listed as a stroke. Eddie and his brother, drummer Alex Van Halen, co-founded their namesake band, bringing in charismatic frontman David Lee Roth and bassist/backing vocalist Michael Anthony in 1974 to round out the group's classic lineup.

Eddie quickly became known for his fluid, fast and inventive playing. He was particularly known for his signature "finger-tapping" technique; while he didn't invent it, he ultimately became its best-known purveyor.

Eddie co-wrote all of Van Halen's original songs, and the band enjoyed massive success both with Roth, who left the group in 1985, and with David's replacement, Sammy Hagar.

Roth rejoined Van Halen in 2006, and Eddie's son, Wolfgang, replaced Anthony on bass that year. Van Halen was inducted into the Rock & Roll Hall of Fame in 2007. The band continued to tour until 2015, but Eddie, who was first treated for cancer in 2000, experienced declining health during his final years and there was no further activity from the group.

Between Peart's and Van Halen's passing, on May 9, we lost one of the last living founding father's of rock 'n' roll, Little Richard, who died of bone cancer at age 87. Born Richard Penniman in Macon, Georgia, the singer, songwriter and piano player was famous for his flamboyant and high-energy performances, and a singing style punctuated with screams and yells.

Here's a list of many of the music figures who died in 2020, in chronological order:

Marty Grebb -- January 1 -- Multi-instrumentalist, producer and arranger who was a member of the Chicago pop-rock band The Buckinghams from 1966 to 1968. Died at age 74.

Chris Darrow -- January 15 -- Multi-instrumentalist who had stints as a member of Kaleidoscope and The Nitty Gritty Dirt Band. Died at age 75 of complications from a stroke.

David Roback -- February 25 -- Guitarist, songwriter and singer who played with Mazzy Star, The Rain Parade and Opal. Died of cancer at age 61.

Keith Olsen -- March 9 -- Musician and acclaimed producer and engineer. Played bass with the late-1960s garage-rock band The Music Machine, and later worked on albums by such artists as Fleetwood Mac, The Grateful Dead, Foreigner, Pat Benatar and Rick Springfield. Died of a heart attack at age 74.

Phil Phillips -- March 14 -- Singer and songwriter best known for his 1959 hit "Sea of Love," which he co-wrote and which was famously covered in 1984 by Robert Plant and his side project The Honeydrippers. Died at age 94.

Kenny Rogers -- March 20 -- Singer, songwriter, musician, actor, record producer and entrepreneur. He initialy found success in the late 1960s as lead singer of the pop-rock group The First Edition before going on to superstardom as a solo country artist in the 1970s. He was inducted into the Country Music Hall of Fame in 2013. Died of natural causes at age 81.

Bill Rieflin -- March 24 -- Rock drummer who played with Ministry, R.E.M., King Crimson and other groups. Died at age 59 after a long battle with cancer.

Bill Withers -- March 30 -- Soul/R&B singer-songwriter best known for such enduring hits as "Lean on Me" and "Ain't No Sunshine." Inducted into the Rock & Roll Hall of Fame 2015. Died at age 81 of heart complications.

Adam Schlesinger -- April 1 -- Singer, multi-instrumentalist and songwriter who played with the alternative-rock act Fountains of Wayne. Also wrote music for various films and TV shows, and produced recordings by The Monkees and other artists. Died at age 52 of the COVID-19 virus.

Matthew Seligman -- April 17 -- Founding bassist of influential U.K. alternative-rock band The Soft Boys, also played with such artists as Thomas Dolby, David Bowie and The Thompson Twins. Died at age 64 due to complications of the COVID-19 virus.

Ian Whitcomb -- April 19 -- British entertainer, singer-songwriter, producer and actor. Had a top-10 hit in 1965 with "You Turn Me On." Died at age 78 from complications of a stroke.

Millie Small -- May 5 -- Jamaican singer who had a #2 hit in 1964 with "My Boy Lollipop," the first song by an artist from her country to reach the singles charts in the U.S. and U.K. Died at age 73 after suffering a stroke.

Little Richard -- May 9 -- Born Richard Penniman, the singer/songwriter/piano player was considered one of the founding fathers of rock 'n' roll and among its most dynamic performers. In 1986, became one of the first artists to be inducted into the Rock & Roll Hall of Fame. Died at age 87 of bone cancer.

Derek Lawrence -- May 13 -- Producer who worked on early albums by Deep Purple and Wishbone Ash. Died at age 78.

Phil May -- May 15 -- Founding frontman of veteran U.K. band The Pretty Things. Died at age 75 of complications following hip surgery.

Bonnie Pointer -- June 8 -- Original member of The Pointer Sisters, who co-wrote the sibling act's hit "Fairytale," and went on to have some success as a solo artist after leaving the group in 1977. Died at age 69 of cardiopulmonary arrest.

Benny Mardones -- June 29 -- Singer-songwriter who scored a top-20 hit two times during the 1980s with the soulful ballad "Into the Night." Died at age 73 from complications of Parkinson's disease.

Charlie Daniels -- July 6 -- Southern-rock and country singer, songwriter, fiddle player and guitarist best-known for his namesake band's 1979 crossover hit, "The Devil Went Down to Georgia." Daniels also worked as a session musician, and contributed to recordings by Bob Dylan, Leonard Cohen, the Marshall Tucker Band and many more. Died at age 83 of a stroke.

Steve Holland -- August 2 -- Founding Molly Hatchet guitarist, played with the group from 1971 to 1984. Died at age 66 of pneumonia after contracting COVID-19.

Jan Savage -- August 5 -- Lead guitarist and backing vocalist for the garage-rock band The Seeds, best-known for their 1966 hit "Pushin' Too Hard." Died at age 77.

Frankie Banali -- August 20 -- Longtime drummer for Quiet Riot, and also played and recorded with a variety of other well-known artists, including W.A.S.P. and Billy Idol. Died at age 68 of pancreatic cancer.

Ronald Bell -- September 9 -- Founding member of Kool & the Gang. Multi-instrumentalist, songwriter, arranger and producer for the band. Died at age 68.

Toots Hibbert -- September 11 -- Frontman and songwriter for influential reggae and ska band Toots & the Maytals. Died at age 77 from complications of COVID-19.

Edna Wright -- September 12 -- Lead singer of the female R&B trio the Honey Cone, who scred a #1 hit in 1971 with "Want Ads." Wright was the younger sister of girl group legend Darlene Love. Died at age 76.

Tommy DeVito -- September 20 -- Founding guitarist and singer with The Four Seasons. Inducted into the Rock & Roll Hall of Fame with the group in 1990. Died at age 92 after contracting the COVID-19 virus.

Mac Davis -- September 29 -- Singer, songwriter and actor. Songwriting credits include Elvis Presley's "In the Ghetto," Bobby Goldsboro's "Watching Scotty Grow" and the oft-covered "I Believe in Music." Had a chart-topping solo hit in 1972 with "Baby, Don't Get Hooked on Me." Died at age 78 of complications from heart surgery.

Helen Reddy -- September 29 -- Hitmaking Australian singer and actress best-known for her 1971 chart-topping female-empowerment anthem "I Am Woman." Died at age 78 from Addison's disease.

Eddie Van Halen -- October 6 -- Lead guitarist, songwriter and sometimes keyboardist for legendary rock band Van Halen. Inducted into the Rock & Roll Hall of Fame with the group in 2007. Died at age 65 from complications of cancer.

Spencer Davis -- October 19 -- Leader and guitarist of the popular 1960s British beat band The Spencer Davis Group. Died at age 81 while being treated for pneumonia.

Len Barry -- November 5 -- Lead singer of the Philadelphia doo-wop group The Dovells, who, after leaving the band, found solo success with the 1965 smash "1-2-3." Died at age 78 of bone marrow cancer.